Unit composition is a critical element of a player’s strategy when playing games which feature fighting among armies. What units the player will develop depends on the enemy they will face as well the player’s unique playstyle. In RTS (real-time strategy) games such as the Starcraft franchise the player creates units with different roles and upgrades them to create a dynamic fighting force.

One of the most basic strategies which can be executed by almost any player, new to the franchise or a veteran, is a rush.  This strategy focuses on producing a few units as fast as possible and immediately attacking the enemy. Rush strategies are often referred to as “cheesing”, an offshoot of cheesy, since the strategies are viewed as silly and overly simplistic. A famous rush strategy implemented in Starcraft II is the Zergling rush; since 2 units are produced for every unit made the player can easily output a small army very quickly.  Rush strategies are meant to overwhelm the enemy for a decisive and quick victory, however, due to the all-in nature of a rush strategy it can also lead to a quick defeat if it fails.

(An army of colossuses in Starcraft II)

Since highly advanced units are the most powerful it can be tempting to forego building a force of diverse units and build an army of just the strongest tech. However only focusing on a tech advantage can be a fatal mistake; the time and resource cost of tech often means that it won’t be available until the late game, and a more savy opponent will easily be able to defeat your singular unit army by amassing units which counter them. 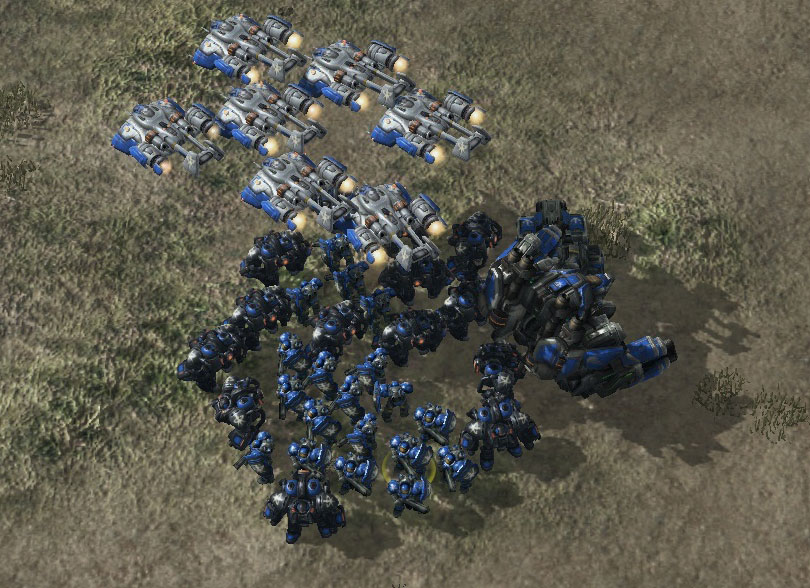 Another method of play is famously known as a bioball; its focus is to develop an army with a balanced number of units so that a little of each type is represented.  This is often the strategy used by default AI enemies since it doesn’t need to be based on what their enemy is doing. A bioball allows for a dynamic army which has the ability to counter many different enemy formations with a relatively consistent success rate.  The drawback of going for a well rounded build is that while the player has a diverse grouping of units, if their enemy develops a few hard counters to their most powerful units, their army could easily collapse into its weaker fragments.

(All marine build in Starcraft II)

The thought process behind unit composition often requires analysis of the enemy’s units and a calculation of the risks involved with the army the player wants to develop. Yet, at the end of the day the player’s army is always going to be a reflection of the player themselves.  That’s why such diverse strategies exist; because a player wanted to go all Zerglings or all Marines and rush the enemy’s gates, because a player liked to roam the map and needed a sturdy bioball to patrol with some margin of safety, or because a player wanted to hold up in their base up until they could unleash a tech heavy assault with just the most powerful units. Thus unit composition actually becomes the strategy of how the player pairs the units they need to play, with the units they want to play.