Are genres an evolution of gameplay or just different types?

The mobile market has come a long way from the tap intensive, twitch gameplay it started with.  With the inclusion of persistent worlds within mobile games the player can play for bits at a time while the game world continues to develop in the background. However, that is not to say that the desire players have to enjoy a quick session that begins and ends within a few minutes has gone away with the introduction of new genres and gameplay models.

My own back and forth between playing games that feature short game loops with simple inputs, and in depth games which feature choices that will produce progress that will occur in hours if not days, made me question the value of each type of experience. Could I appreciate both for the unique experience they provide?  Or did enjoying twitch games make my long form games feel too laborious, and in exchange did enjoying long form gameplay make my twitch games feel too juvenile and mindless?

One of my favorite mechanical systems in games are physics mechanics.  There is something so satisfying about launching things, traversal, flight, swinging, leaping; anything that can propel an object into a unique motion, elegant or violent, based on inputs and obstacles.

Flip Diving, in which the player tries to maximize the number of flips they do before entering a body of water, while focusing on their rotations to enter the water at just the right angle, provides one such experience.

Play sessions are fast; going from launch screen to play screen to gameplay in one tap.  After their initial leap, the player only has a one touch mechanic of tucking or releasing while in air to control their rotation; yet the finesse and fidelity of timing is where the mechanical system gets deep.  Still each jump may take mere seconds, enough so that whenever I am a little bored I know I can probably get a jump off.  This micro thrill along with mechanical fidelity allows me to enjoy the game if I have a little bit of time or if I’m relaxing and really focusing on getting better at the game.  Unlike strategy games, there is no long game, only the moment, only the match. 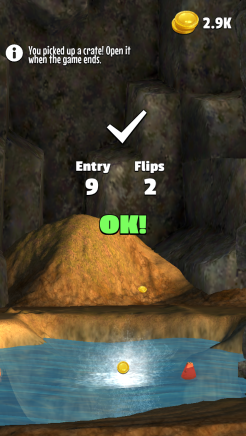 (Flip Diving‘s launch sequence, from title screen to gameplay in one tap)

TerraGenesis, which I have discussed in my feature, TerraGenesis: transforming failure into success, is a game in which almost all rewards are based entirely on delayed gratification.  It is the careful planning for some point in the distant future and slowly achieving one’s goals that motivate the player to keep coming back.

(TerraGenesis, a game within which the player can enjoy the slow steady progress requiring days if not weeks)

I regularly return to the game to note the number of credits I’ve earned while away, to make sure that my planet is in order and that the growth and balancing of variables is trending in the right direction, to start a research project, or to build or upgrade structures.  Then the only thing left to do is wait to see how it will advance in even more time. (TerraGenesis, The player manages the sea levels by slowly decreasing it over time in a controlled descent)

This type of game is almost more rewarding outside of gameplay; in that the knowledge that growth is occurring, dreams are being worked on, things are progressing, is a reward in itself.  Its lessons are not immediate as in Flip Diving, where a bellyflop means failure, it is nuanced, and requires patience, forethought, and reflection.

It is important for the time we commit to games to feel meaningful.  Whether it is a short bursts of twitch gameplay in which we feel masterful in our mechanical prowess, or scheduled returns to a strategy game to make a tactical decision in order to achieve a long term goal. However, only focusing on one type of experience, without context, can make it difficult to maintain the fulfillment we derive from gameplay.

After flipping for the hundredth time I want my gameplay to lead to something more. After looking at a timer for sea levels to balance out, roughly equating to a few days wait, I want something immediate.

The option to play a silly game or an intellectually stimulating game, and to be able to derive equal amounts of pleasure, in albeit different forms, is actually one of the greatest strengths of games as a form of entertainment. Thus, oscillating between a multitude of games and genres, appreciating each for what it can uniquely provide the player, actually enhances their ability to enjoy the other.