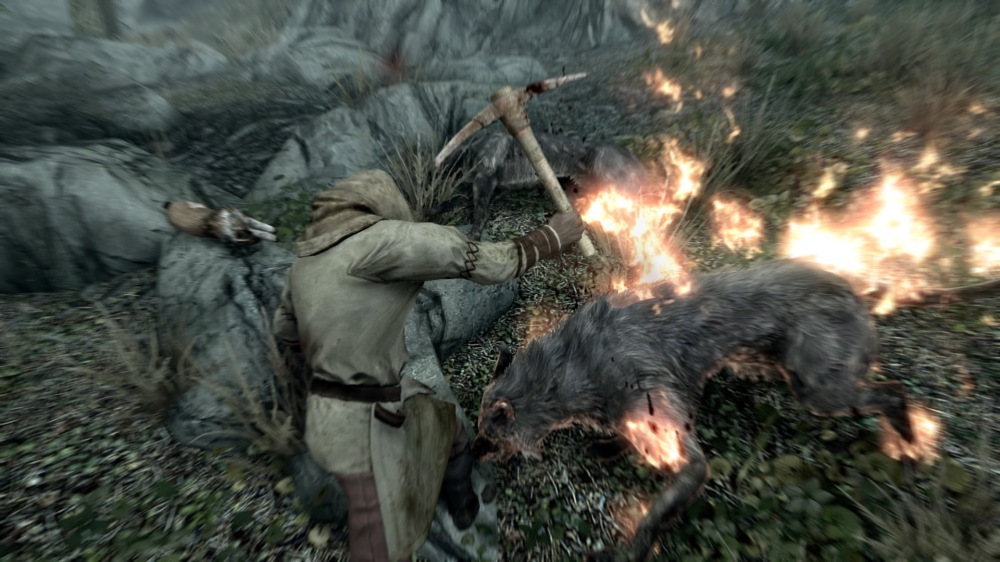 (As Puck begins to enchant his pickaxes, he starts to become a more powerful force in combat.)

Smithing, would a prospector care?

As I continued to gather ore, taking it to town and smelting iron into bars, taking iron and forging them into daggers to be sold, I realized that that was the last thing Puck would have on his mind.  He wanted gold, lots and lots of gold, gold to wear, gold bars in his inventory, gold coins in his pocket, that’s it.  He wasn’t a blacksmith, he wouldn’t be using armor, or any weapons outside of his trusty pickaxes, so what then, was the purpose of spending his time over a hot forge?

Granted, when the time comes, Puck may fancy himself a jeweler, finding rare gems and crafting magnificent pieces of gold jewelry to sell, but outside of that, the forge life is not for him.

This is further reinforced by the existence of an Alteration spell called Transmute which actually changes iron ore into silver ore, and if cast again changes silver ore into gold ore. The discovery and application of this magic was the second major defining point of Puck’s character following his commitment to his pickaxes. 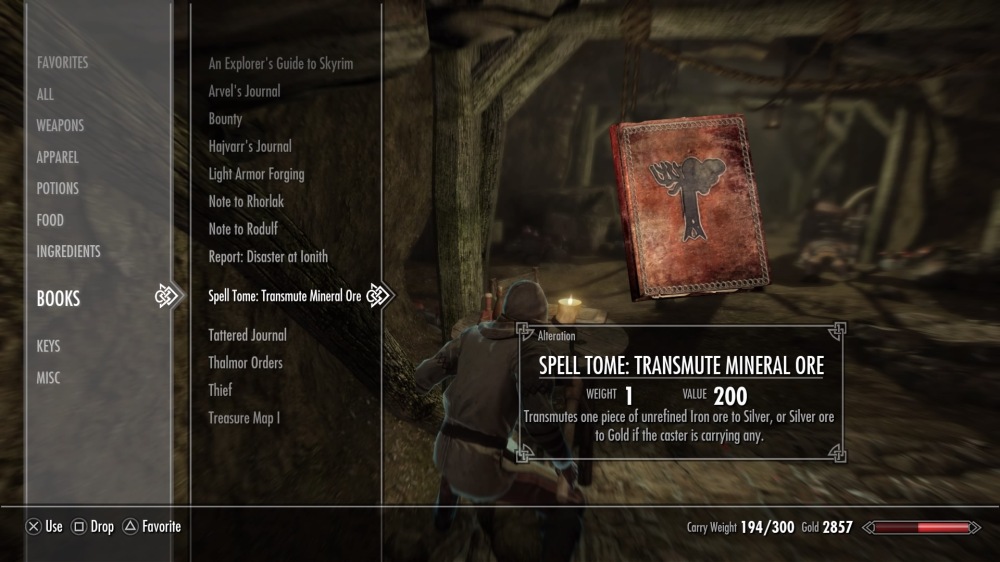 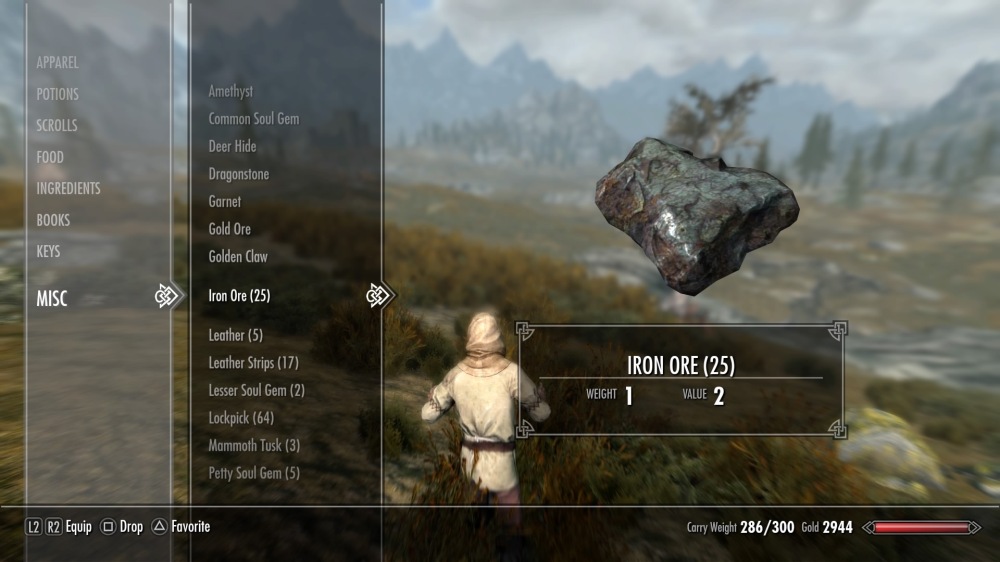 When a berserker becomes a thief

Puck had already been a bit of a scoundrel with sticky fingers, stealing every piece of gold he could find, and the occasional horse to get around, but there was no time he was more willing to steal than when it came to food.  Early on I decided that Puck would have a strong suspicion of potions, and would never touch them for sustenance or healing.  Thus, Puck was stuck scrounging for food and drink wherever he could find it, cooking whenever he had a chance.  The main problem with relying on food is that food is much less efficient in general than potions for restoring health, mana, and stamina, meaning that Puck would need to carry and consume enormous amounts of food, which in practice exemplified his compulsive characteristics.

As I continued to progress with Puck I began to notice that his weaponry choices were an extreme hinderance in fights with tougher foes or enemies in groups, that Alteration alone did not do enough to protect him when he did so little damage. As I made my way to the Halted Stream Camp, within which one of two copies of the Transmute spell book can be found, I was able to break through the first few waves of enemies, however the main chamber, which contained the book, had enemies which Puck could not endure. 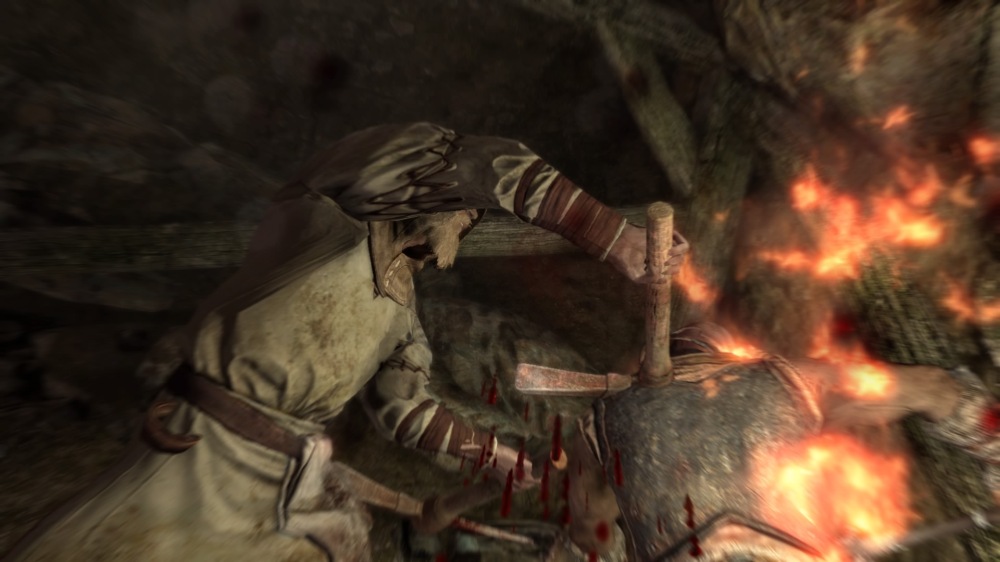 (Puck landing a killing blow with his dual pickaxes)

I was frustrated after a few attempts of taking the enemies on in a berserker rage without making progress.  It was at this point that I simply let Puck take over, and define himself. He sneakily mined every iron ore deposit in the mine and then crept towards the main hall; he poked his head into every bag of food like the little rat thief he actually was.  Once the bandits caught wind of his presence he quickly applied an Alteration spell, leapt over the railing, swiped the Transmute book off of the table it lay upon, grabbed a few items from the unlocked chest next to the table, all while taking a few axe blows and frost damage, and sprinted away with glee.

As Puck ran out of the camp I just decided to let him keep running a la Forrest Gump.  I equipped Transmute in both hands and kept making my way down the path simply enjoying the process of turning iron into gold. As Puck reached a good distance from the camp I thought to myself, “Ok, this little thief will fight his way through what he can stand, and simply swipe what he wants from the situations he cannot, and run away; but where does he go from here?”  The next logical step for Puck would be to make his way to Riften and pursue his destiny as a member of the Thieves Guild.  As a symbol of this transformation, Puck attempted to pickpocket a patrolling guard with predictable failure, but just like before, as soon as Puck got into trouble, off he ran. He ran from the guards, from highway bandits, from a pack of wolves, all the way to Riften.

After some more time tweaking Puck’s playstyle, I have focused his intentions and mechanics further.  Puck’s primary focus is on collecting iron ore and gems, dual wielding pickaxes to hack and slash his enemies apart, Alteration flesh spells to keep him alive, and Transmute to live out his King Midas dreams. As Puck continues to grow I will also include Pickpocket and Stealth to his repertoire:

Below is some gameplay footage of my favorite moments using Puck’s pickaxe and Alteration spells in battle.  Also featured is footage of Puck’s first attempt at pickpocketing followed by a chase involving various aggressive NPCs and animals, all while Puck simultaneously sprints away and Transmutes iron ore into gold ore.

This is the third installment in my character series titled Puck the Prospector, if you enjoyed it please feel free to read through the other articles within the series. I welcome discussion on this topic and if you have experiences of your own you wish to share please do so in the comments below, or write in to playprofessor@gmail.com.