In the Legend of Zelda: Breath of the Wild, weaponry and shields come with the caveat of being destructible. The idea of destructible gear is not new to the Zelda franchise, with consumable items such as deku sticks being able to be used for both utility as torches and as weapons. However, it can be difficult for players obsessed with getting their favorite sword and shield combination to face the fact that in Breath of the Wild that combo may only last for a couple of fights before breaking.

This forces the player to constantly collect weapons from their foes, chests they discover around the world, or simply strewn across ancient battlegrounds, abandoned long ago. This makes the difficult decision of what gear to carry and use as an expression of their playstyle.

I, for example, quickly fell in love with the combat style of one handed weapons and  shields due to the safety it provided me.  Yet, this playstyle tended to require getting close to the enemy and striking multiple times to widdle down their health to the eventual killing blow.

Thus when I got my hands on a heavy weapon like a battle axe or great sword, which did substantially more damage, I started using them exclusively. However, the extra damage came at a steep cost, the lumbering attack speed left me open to enemies dodging my attacks or flanking attacks from their friends. Although I was besting the enemies in most of the fights I was engaged in, I often walked away from the fights with nearly fatal wounds. 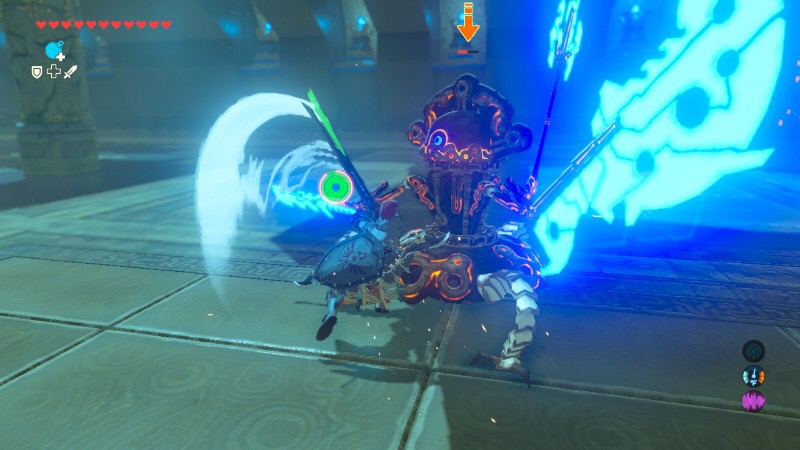 The funny part is that I was saving tons of unused one handed weapons in my inventory lest they break, and only using two handed weapons.  In essence I was avoiding my playstyle to not run out of the weapons needed to sustain it, and instead fully engaging in a playstyle I didn’t care for and surprisingly never running out of weapons for it.

This realization lead me to foregoing the use of two handed weapons and focusing on obtaining and more importantly using my favorite weapons.  After trying out various fighting styles including sword and shield, magic rods, two handed weapons, and spears, I finally decided to move towards using spears as my primary weapon and having one handed swords and shields as a back up when facing tougher enemies.

I love the way spears look in combat and the way they feel when throwing them at an enemy right before they break to deal double damage. Their reach allows me to poke at the enemy and keep them at bay as I would be able to with two handed weapons, while also featuring the fast attack speed of one handed weapons.

The opportunity for playstyle experimentation that Breath of the Wild provides the player through destructible weapons and shields, opens the player’s mind to playstyle variety as opposed to making them feel limited to only using the “best” gear in the game.  ﻿It is impressive how much gear combinations and playstyles can impact how the game is played, and the player’s experience of the world in the process: heavy armor and two handed weapons for those seeking to be juggernauts, light armor and magic rods for those seeking to play as mages, stealth armor and bows for assassins, or as in my case, climbing gear and spears for the exploring survivalist.

You can read more about my use and exploration of the climbing mechanic in my article Breath of the Wild: growing knuckles.

Do you enjoy exploring different playstyles through gear? Do you find the challenge of collecting your favorite weapons in Breath of the Wild to be fun or annoying? Do you like being able to switch your playstyle through gear as opposed through a character with skills? What’s your favorite gear combination and do you feel like it is viable in Breath of the Wild? I welcome discussion on this topic and if you have experiences of your own you wish to share please respond to the thread for this article, or talk to me through my email or any of my social media: playprofessor@gmail.com, Facebook, Twitter.

If you’d like to see more of my gameplay screenshots check me out on Instagram or the Miiverse at PlayProfessor.