I have always loved the different classes and playstyles in the Mass Effect franchise.  It made me feel like I could put my own personal spin on the protagonist whether it be Commander Shepherd in the original trilogy or Pathfinder Ryder in Andromeda.  In both story arcs the hero character had a strong narrative that was true regardless of their histories and the choices the player made throughout their journey.

One way in which the player expressed their ideal for the protagonist came in choosing their class: the Soldier, the Vanguard, the Adept, the Sentinel, the Engineer, and the Infiltrator. These classes indicated which mechanics the player would have access to either specializing in one area or building a hybrid from the combat, biotic, and / or tech skills.

While the hybrid classes have always been a fun way of hedging your bets on which mechanics would be the best by getting some from each skill tree, the true specialists always performed better in gameplay with their min / max stats.  Playing as a soldier granted the player full access to the firepower found all across the universe, playing as an Adept essentially made the player into a force wielding Jedi / Sith, and playing as an Engineer let the player utilize technology to empower them, elemental attacks, hacking enemies, and attack drones.

I was always enticed by the Engineer class because I am drawn to the road less travelled. Playing as a Soldier seemed to be the expectation for players, a robust arsenal of weapons and with the protagonist being military why wouldn’t they be a soldier?  Playing as an Adept seemed to be the sexiest choice, using superpowers, gifts from the gods allowing you to manipulate dark energy and dark matter to toss enemies about like rag dolls, why wouldn’t you want to play that?

But play as an Engineer? A nerd crouched behind cover with a small robot slowly and inefficiently attacks a single enemy, while your adept companion flies across the room to melee attack the biggest enemy, and your soldier companion fires off an entire armory of assault rifle rounds to decimate wave after wave of enemies?  The Engineer experience, obviously the dark horse build, was never as fun as I hoped it would be, never as viable as the super soldier you were tempted to become via the combat or biotic skill trees.

Why switch profiles when you can respec?

When developing a character in an RPG (roleplaying game) sometimes after progressing deep into the game, the player finds that their build / kit, the mechanics they have chosen to serve as their primary abilities, didn’t pan out quite as they thought.  At these points some games offer the player the opportunity to “respec” or re-specialize, usually at a steep cost to the player.  This process allows them to reallocate the distribution of skill points on a character’s skill tree, changing their specialization.  Essentially taking all of the experience they had accrued and building a different character with it without starting over. 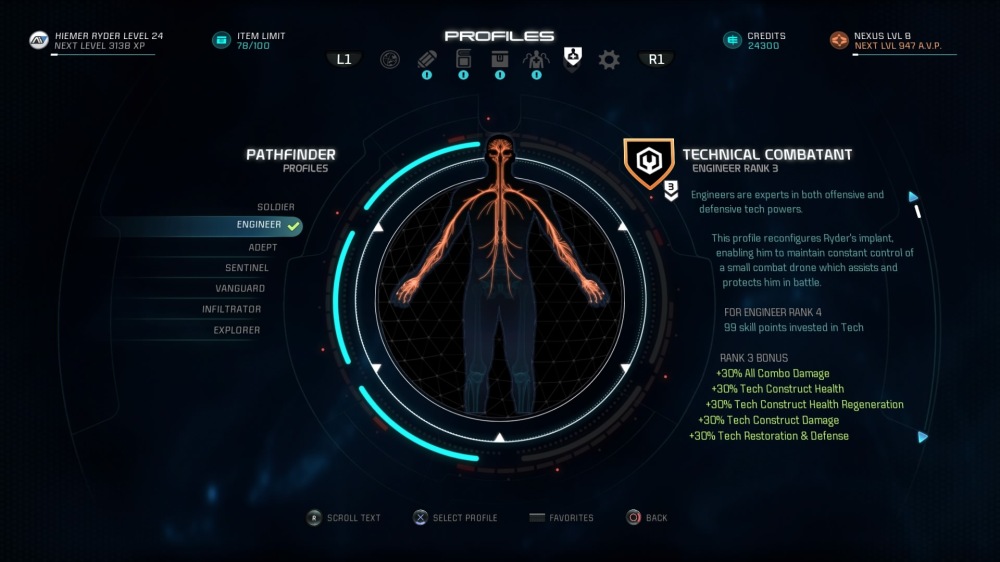 In Mass Effect Andromeda, it seems the developers tried to address this halfheartedly by allowing the player to apply a “profile” to their character.  In theory, if the player had a few points in combat and a few in tech they could unlock the profile of Infiltrator which granted them special perks and bonuses for combat and tech, however,  if they wanted to switch over to being more tech oriented they could switch to their Engineer profile which would bolster their tech skills even further and leave their combat skills unaffected.  In practice this meant splitting your skills among multiple trees to gain certain profiles, and as I mentioned earlier, the hybrid classes are never as strong or as satisfying as specialists. 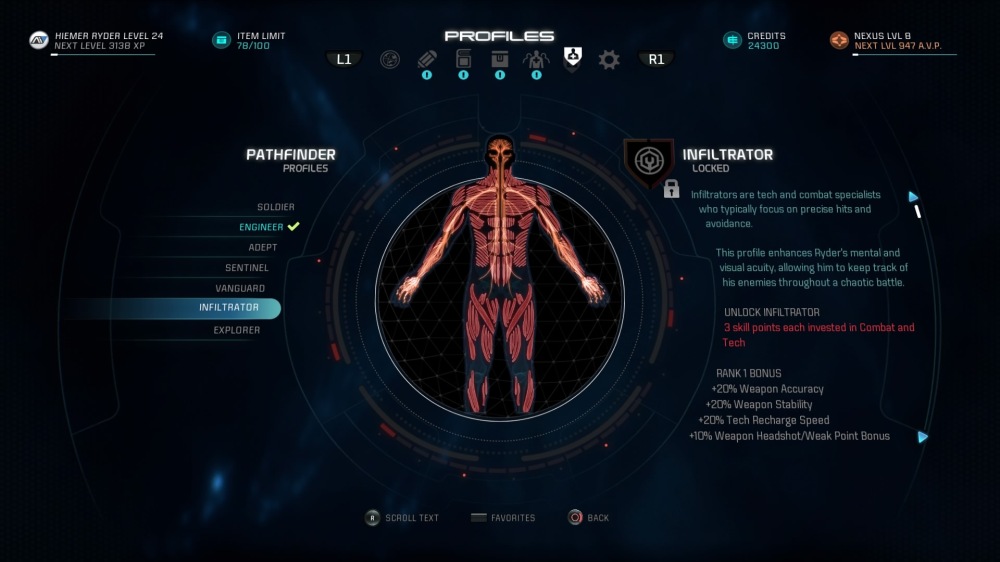 A much easier solution to switching profiles and going from one weak build to another is simply to go to the MedBay on the ship and respec your character entirely.  In this way I went from being a full blown Engineer to a Super Soldier, to an Infiltrator, to a Vanguard, to an Adept, back to Engineer a few more times, then back to a Soldier, and now I’m at my 15th respec wondering what I should be. 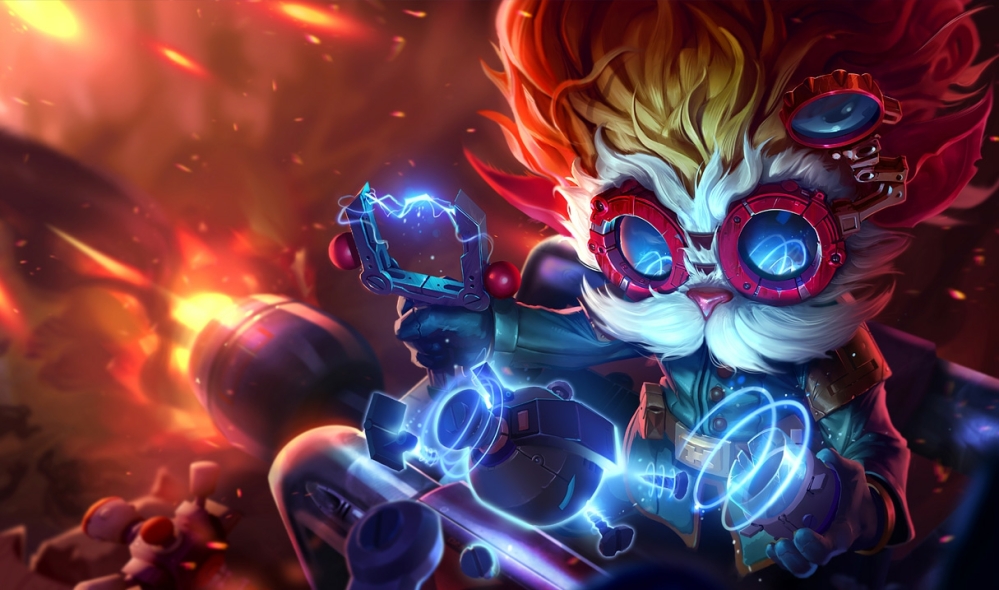 I desperately wanted to maintain my Engineer status and finally go through a Mass Effect game using the underutilized Engineer class.  I even named my character Heimer Ryder in honor of my favorite engineer / inventor character Heimerdinger from League of Legends to remind me each time I wanted to respec him that it would be breaking my character to make him a Soldier or an Adept.

Even then, I fought my way through an entire base as an Adept, wiping out entire armies of enemies with melee attacks and novas of destructive dark energy waves and it felt great!  Although the developers wanted to design flexibility with profiles to switch between mechanical kits, the ability to respec at a relatively low cost removed the need to “make it work” by switching profiles when you could instead just rebuild your character entirely.

For me as a player this means that I have spent a lot of the game as an amorphous character without a consistent playstyle and it has taken away from the experience of growth that I would have had to face otherwise had I been stuck with a more challenging kit.  I am still struggling to define my Engineer character in the Andromeda galaxy and I am determined to find a way to make Engineer Heimer Ryder a compelling and powerful Pathfinder in the Andromeda galaxy.

What do you think of the classes in the Mass Effect franchise?  Do you think there is enough diversity in gameplay?  What’s your favorite build in Mass Effect?  Do you believe that the classes are balanced or that some are more viable than others? I welcome discussion on this topic and if you have experiences of your own you wish to share please respond to the thread for this article, or talk to me through my email or any of my social media: playprofessor@gmail.com, Facebook, Twitter.