GLHF is a series that looks to better understand the dynamics of sportsmanship in video games, today we are taking a look at how honorable behavior is being developed in games, specifically the revamped honor system in League of Legends.  If you like this article please feel free to check out the rest of the series: pt. 1: Sportsmanship in video games, pt. 2: Selfishness / Noncompetitive play, pt. 3: Kindness, pt. 4: Respect, pt 5: Rage Quit, pt 6: Toxicity, pt 8: Sadness & Defeat, pt 9: How to play for friendship, and pt 10: What we’ve learned.

Before taking a hiatus from League of Legends, I had worked hard to become an honorable player within the community.  Players could honor any and all of their teammates for being Friendly, Helpful, or having great Teamwork, they could also honor Honorable Opponents, but this was seldom used for its intended purpose and instead often given out of pity.  These would unlock load screen ribbons denoting Great Teammate, Great Mentor, Great Leader, and Great Opponent, respectively.  I worked my tail off to get the Great Mentor ribbon, since it was rare and denoted that I had been helpful in teaching the game / culture to other players. 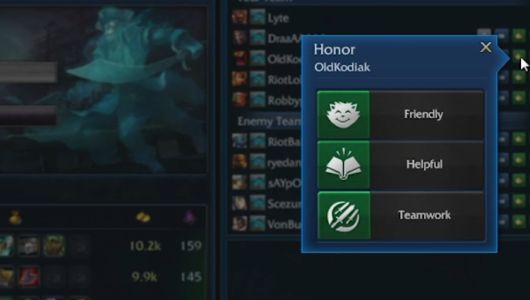 However, it was very hard to understand why sometimes it would show up and sometimes it would go away or get replaced with a Great Opponent ribbon.  It was the only way I could excel at being a member of the community and not just the game, eventually I just stopped seeing ribbons on anyone.  With ribbons being the only reward for playing positively there wasn’t much incentive to acquire honors.  Over time, that part of the community seemed to lose momentum.

Riot Games revamped their honor system to have rewards be more precious and more impactful on the player’s acquisition of unlockable content.  At first I was sad to see the mentorship vote removed entirely but I believe the cultural course correction that took its place to be an intelligent one.  Instead of being helpful or providing instruction they now offer a reward on Staying Cool, which at first seems to be very similar to being friendly.  However, it hits a mark that helps to counter balance toxicity, if raging is the problem then a solution would be to encourage calm.  Friendliness and Leadership remain as standards of good team play, but this recognition for being “tilt-proof” is an incredibly satisfying way to be received by your peers. 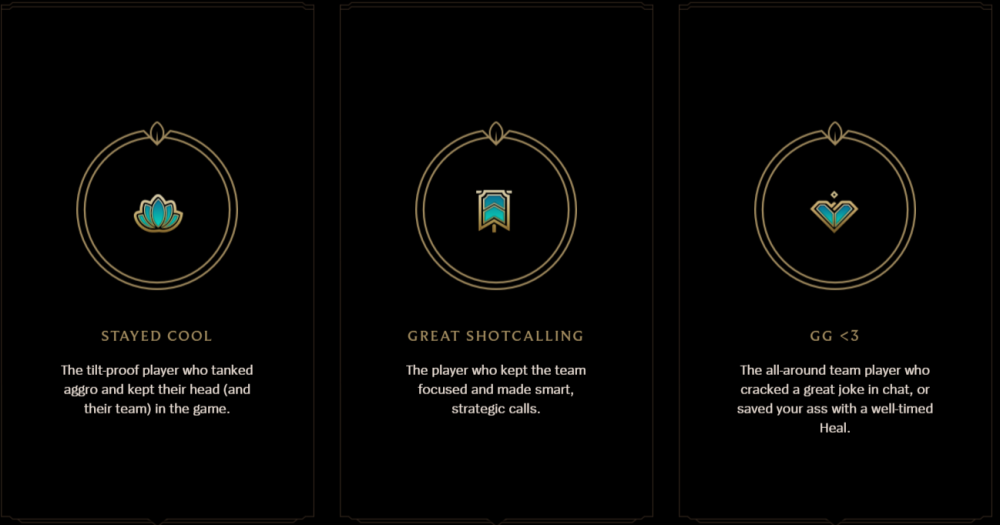 Ironically enough the new system does not show what honor you received to any other player.  So the sought after mentorship ribbon effect isn’t part of the honor seeking equation for me as a player.  Instead there are ranks of honor, starting at level 2, the player starts with a baseline level of honor.  At first I thought it was an arbitrary number with level 3, 4, and 5 just being bolstered versions, however I realized later that level 1 and even level 0 “dishonorable” existed as ways to illustrate how a player could fall for being a negative teammate.  This way of having the player start at a “normal” mode of behavior with the chance to grow into a more honorable player, or fall due to bad behavior is a subtle way Riot Games is helping to give players metrics, and data on how the player as an individual is performing in the game.

Striking a balance between punishing and rewarding honorable or dishonorable play is very challenging.  However, the way Riot Games has approached the problem ingeniously plays off of the player psyche on either side of the spectrum. Players who are driven to perform well for the accomplishment and acknowledgement of being honorable, such as myself, get to display it through their load screen flair.  Higher honor levels also grant a small boost in receiving unlockable content.

However, for players who are not driven to show off their great good manners, this system alone will not work, therefore Riot imposes penalties on unlockable content.  At level 1 the player is locked out of all rewards save for key fragments and accumulates them at a much slower rate.

At level 0, Dishonorable, the player is locked out of all free content rewards.  By doing so Riot Games‘ honor system puts the rewards of being good right in front of the player, allowing them to watch those rewards become fewer and fewer the worse they are to their team members, and inversely encouraging them to continue to grow as a team member the moment they choose to do better. 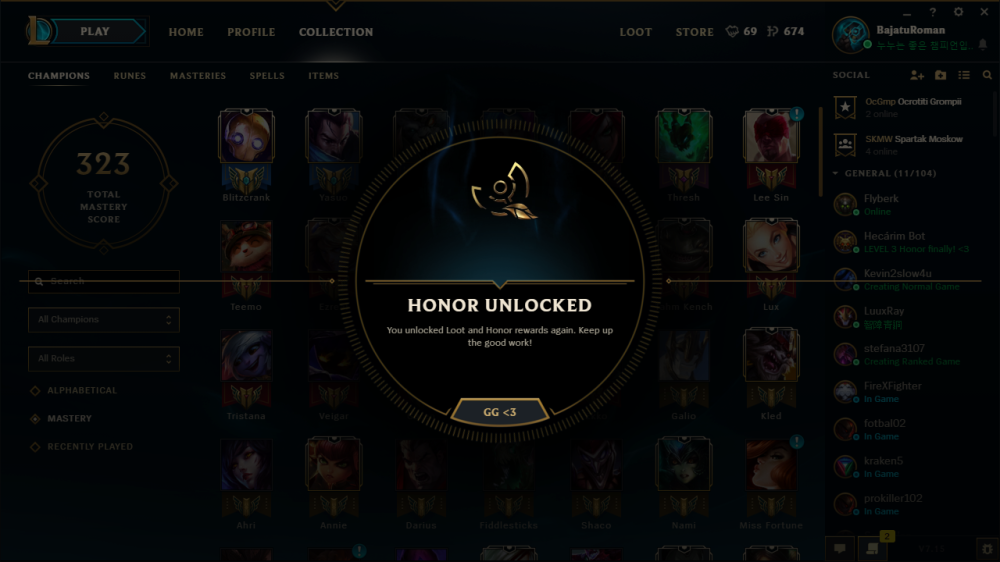 In a sense Riot Games‘ approach to the player is that of a child whose toys get put on top of the fridge, visible yet out of reach until the player decides to improve their behavior.  However the player’s fall from grace and gradual return to a rewarding status helps reinforce the idea of karmic growth, of momentum in the right direction by behaving in a positive way with your teammates and maintaining that outlook from game to game.

When I first came back to League of Legends, I was determined to climb to the highest rank of Honor, because what kind of Play Professor would I be if I didn’t practice what I preach.  As I began my ascent I was talking to other players about what they thought about the honor system, a pessimistic Yasuo player told me it worked for half a second but then people stopped trying, and that he had never gotten past Honor 3. I was a little shaken but I was determined to keep playing kindly, doing my best, acknowledging my mistakes, and encouraging my teammates.  I said “good luck have fun all :)” in every game I went into, playing as Teemo I often got told to go to hell.  I said gj or nj (good job / nice job) when players took objectives or got kills, even when those players had raged against me, I was mocked by a teammate saying “lol Teemo is our cheerleader.”   I defended players who were being attacked by toxic players, and tried to stay positive.  Slowly but surely I went to Honor 3, then Honor 4, and just recently I finally got into Honor 5 and it was such a rewarding feeling. I sincerely hope that this type of positive culture growth proves successful for Riot Games and hopefully gets adopted by other games struggling with toxicity and negative players.  How do you feel about the new Honor system?  Do you believe it does enough to reward / punish players?  Do you believe it actually helps guide players towards positive reform better than simply reporting and getting banned?  I welcome discussion on this topic and if you have experiences of your own you wish to share please respond to the thread for this article, or talk to me through my email or any of my social media: playprofessor@gmail.com, Facebook, Twitter.